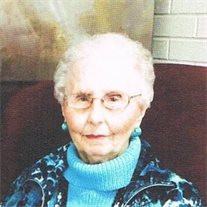 Voy Alderman of Bassett, Nebraska was born September 27, 1916 in Springview, Nebraska to Harry and Ella (Williams) Carr, and passed away Saturday, May 27, 2017 at the Rock County Long Term Care in Bassett, Nebraska at the age of 100 years and eight months. Her dad nicknamed her "Topsy" and her six siblings always referred to her as "Tops." Her family moved from Springview (Keya Paha County) in December of 1919 to Bassett (Rock County), where her dad owned and operated the Ford Garage in Bassett for 25 years. She attended Bassett Grade School and graduated from Rock County High School in Bassett in 1934. On the evening of August 7, 1937, she married John Bradford Alderman in the Methodist parsonage. From this union three children were born, John Bradford Jr. "Brad," Mary Ann, and Edgar Harry. Voy worked for Andy Anderson at the Bassett Livestock Auction and the State Farm Insurance Company. In 1970 she began working for her sister, Orfa Carr at the Rock County Assessor's office and retired as the Deputy Assessor in 1983. Voy lived all of her life in Nebraska and most of it in Bassett. She was very proud of her heritage, of Bassett, and her children and grandchildren. Voy enjoyed traveling to wonderful places, near and far, with family and friends. She especially loved going to the Verdigre Creek north of Royal, Nebraska, during the summertime with family. When Voy was at home, she spent many hours tending her flower gardens, feeding the birds, and entertained many at her famous porch parties. Voy loved to play cards, her favorite game being Canadian Rummy, and taught anyone who would sit down how to play. She was an avid Husker football fan and always dressed in Husker attire for every game. Voy was preceded in death by her parents, Harry and Ella; all her siblings Cecil, R.D. "Smoke," Max, Orma, Orfa, and Wilma; her husband, John B. Alderman, Sr.; her son, John B. Alderman, Jr. "Brad," her son-in-law, Robert L. Billesbach and her grandson, John Phillip Alderman. She is survived by her daughter-in-law, Virginia (March) Alderman of Plainview, Nebraska; daughter, Mary (Alderman) Billesbach of Tucson, Arizona; son and daughter-in-law, Ed and Gail (Bischoff) Alderman of Minden, Nebraska; nine grandchildren, 16 great-grandchildren, nine great-great-grandchildren, and many nephews and nieces. Memorials will be given to the Bassett United Methodist Church, Rock County Senior Center, and the Rock County Long Term Care. Condolences and cards can be sent to Mary (Alderman) Billesbach, 7165 E. Chorro Circle, Tucson, AZ 85715 and Ed & Gail Alderman, 1301 J Road, Minden, NE 68959. Funeral Services were held on Saturday, June 3, 2017 at the United Methodist Church in Bassett, Nebraska. Officiating the service were, Pastor Rod Heilbrun and Pastor Gary Graesser. Music was provided by JoAnn Swanson and Stanley Larson. Special music selections were, "Because He Lives" and "Softly and Tenderly." The congregational hymn was "Amazing Grace." A recessional selection of "My Wild Irish Rose" was also provided by Stanley Larson. Pallbearers were, Brian Alderman, Brett Billesbach, Andrew Alderman, Adam Alderman, Toby Thompson, and Craig Randel. Honorary bearers were, all of Voy's other grandchildren, great-grandchildren, great-great-grandchildren, family and friends. Burial followed at the Bassett Memorial Park Cemetery. Hoch Funeral Home was in charge of the arrangements.

Voy Alderman of Bassett, Nebraska was born September 27, 1916 in Springview, Nebraska to Harry and Ella (Williams) Carr, and passed away Saturday, May 27, 2017 at the Rock County Long Term Care in Bassett, Nebraska at the age of 100 years and... View Obituary & Service Information

The family of Mrs. A. Voy Alderman created this Life Tributes page to make it easy to share your memories.